Politics and party? Queerfeminism through HipHop? Subculture in the Mainstream? The rapper Sookee has been active in the rap scene for 15 years. Through several released albums, countless collabos, appearances at public podiums, at universities and in workshops, she creates spaces that actively seek answers to the question of how social change works. She uses her popularity and her great external impact to promote dialogues – even between young and old. Sookee is perceived as a role model of girls, women and queers in pop culture and her output is characterized as sophisticated. As a musician and activist she is the current winner of the Louise-Otto-Prize, ambassador of the social project “Musik-Bewegt”, godmother for two schools of the campaign “Schule ohne Rassismus – Schule mit Courage” and is politically involved as a self-confessed anti-fascist for numerous other initiatives. She is also a mother and full of hope. Inevitably.

After more than 15 years on stage and seven solo releases, Sookee says goodbye to her active role as a pioneer of queer feminist rap in 2019, in order to concentrate fully on family music as Sukini with her current album “Schmetterlingskacke” (VÖ 27.9.2019). A decade of radical struggles is now giving way to a time of gentle utopias. 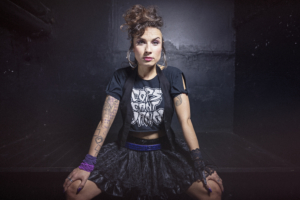